It looks like I have finally responded to the Clomid at 150mg. I went into the scan room 2 weeks ago, expecting and hoping nothing. I’d have chewed off my right arm not to have had to go in for it, seeing as the past 2 cycles have left me crushed, but when I heard, “It looks like you’ve got a follicle”, I reacted in the only way I seem to do to anything these days – I burst out crying.

I think she thought I was a freak. It was the kind of reaction you’d expect when telling somebody you could see a little heartbeat, not a mere follicle. But it’s what I’ve so desperately been hankering for from the day I found out I had PCOS – just to ovulate, and get from square “minus one” to “one”, in line with every other woman.

They followed the follicle with another scan, and a day 21 Progesterone, just to confirm, and I definitely didn’t dream it. It sounds complete and utterly OTT, but I actually felt womanly, like I’d made it somehow, and I imagined myself bustling around the house in my pinny, with curlers in my hair, baking cakes and doing laundry like a REAL woman. I felt bright-eyed and bushy-tailed, and my other half joked about my “juicy follicle”. 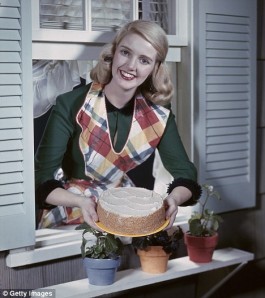 However, we had different sort of problem this month. One that I’m sure plagues many relationships in the world of the “trying to conceive”. TIMED INTERCOURSE. It couldn’t be more unromantic, and charmless. I’ve been a politician’s widow of late, with the Local and European Elections taking up much of his precious time, and leaving me with the dregs. This basically means, a completely exhausted, unhorny man in THE week!! Had I had somebody to call up and say, “No! You cannot possibly hold these elections this week, I’m ovulating!”, I would have done. I have to say, there would be a kind of irony to conceiving a precious, coveted child with some of the worst sex ever.

The bad news I touched upon earlier is that the higher dose Clomid has left my endometrium a little thin (7mm, as opposed to the golden 8mm), and left me as dry as a bone (so to speak) which lessens the chance of conception considerably. Still, it’s progress, and even my Chimp can’t argue with that.

I have been willing myself, with all my might, to switch off to the overthinking of cervical mucus and cycle days, but it feels that this month has been a particularly bad one for “pregnancy exposure” (for want of a better word), than any other, and it’s becoming increasingly hard to stay distracted. Pregnant women are everywhere. Is it just the summer months that brings them all out? Is there something in pollen that’s catching??

If pregnancy’s catching, I want in

Bank holidays in this country notoriously come hand-in-hand with rainclouds and traffic jams, but we decided to get out of the house last weekend, and spend some time together. We visited a stately home, that was hosting a food festival, and it was Family Central. Now, there ARE days that I can look at families and not feel the green-eyed monster stir  (though these are admittedly, few and far-between), but mostly I feel that deep-seated pang in my stomach that reminds me instantly that it might not be our destiny as a couple. The pregnant women are even worse, cradling their bump, and making you wonder how amazing it must feel to be nurturing a life inside of you.

We are now on the infamous “2 week wait”. I’m trying to think of the worse case scenario and persuading myself that if I can handle this, I can handle any outcome. So.. the worse case scenario is that we don’t get pregnant this cycle. But, on the upside, I will have a naturally occurring period that doesn’t involve the need for any pills or potions, like a REAL woman.

Oversharing since 2005. I blog about life, goals and minimalism.

A book and a blog for first-time mothers

The Not So Perfect Life of a Pastor's Wife

Unveiling the raw, real life of being the wife of a pastor one story at a time.

a 30 somethings journey to achieve a dream

When your mind won't stop, you need somewhere to let it all out.

A Journey Through Recurrent Pregnancy Loss

Donor eggs to mommy-hood and everything in between

everything a mama could want

My journey to Motherhood through gestational surrogacy